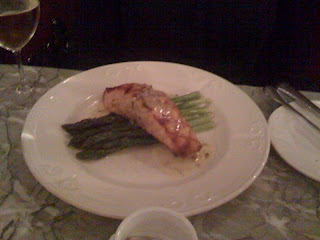 (hahahaha sorry for the terrible picture!)

Dan and I wanted to celebrate our first wedding anniversary in style- so we chose the ever elegant Petit Louis Bistro, a place that I have wanted to go here for a very long time. Before we went, I researched as much as I could and found that people seemed to really love the food but thought it was an incredibly noisy place. That concerned me because I wanted this to be a romantic dinner, but I decided to press on. In actuality, the noise didn’t bother me at all- it was a normal, bustling restaurant. Perhaps the tables were a bit too close, but that reminds me of any European restaurant- so maybe it was trying to give an authentic French flair? Besides, many popular restaurants have tables that are too close to one another—Woodberry Kitchen being one of them.

Anyway, onto to the meal.

Have I ever told you how much I love asparagus? Well, I do. So imagine my happiness when I saw that Petit Louis Bistro was offering an “Asparagus Menu ($30)” since they have local asparagus! I ordered it immediately, along with their suggested wine pairing ($16). The menu started off with Asparagus soup which was INCREDIBLE. It was wonderfully creamy and rich, and the flavor was just perfect. I never thought soup could make me so happy! I was literally cleaning my bowl with my spoon. The next item, the main course, was grilled salmon with asparagus (of course) and served with a tarragon, shallot butter sauce. This was just heavenly. The salmon was crispy on the outside, exactly how I like it- and then the inside was tender and fell away easily with the brush of a fork. The asparagus and the sauce paired perfectly with the salmon- and I love to make sure I had all three on my fork. Loved it! I also liked that it was a generous portion for part of a fixed price menu- that can make me weary.

Dan ordered the House Salad ($8) for starters, which was pretty steep for a house salad- especially because he assumed it was part of the meal! Luckily it was a good salad, and the house vinaigrette had the perfect amount of cheese! His entrée was the Rainbow Trout with almond butter and brown rice ($18). Dan LOVED this- even more than my salmon, and he’s usually a sucker for salmon. I thought it tasted like buttery popcorn, and he agreed- but in a really pleasant well. The rainbow trout is a perfect fish for those who don’t usually like fish- it’s a thicker consistency and not as fish-like! The sauce was really special, especially when mixed with the brown wild rice.

For my menu’s dessert, there was nothing asparagus related- but that was ok! They served Beignets (pretty much like the French version of donuts) with ice cream and a thick chocolate sauce. I loved the chocolate sauce. YUM YUM YUM. I wanted to just eat up the chocolate sauce with a spoon. The beignets themselves were good- but they tasted like donuts, and I’m pretty sure I had a donut that morning so it wasn’t anything special hahahaha. It was actually a lot less sugary than a DD donut, which made the combination of the chocolate sauce and ice cream go really well.

Incidentally- I really enjoyed having the wine pairings with each course. My absolute favorite was the sparkling wine served with the beignets (Clairette de Die, Jaillance NV). In fact, I want to go to my local wine shop, Swirl Wine, to try and find this particular wine. Oh yes- and our waiter, Marco G., was simply lovely!

Overall, this was such a deserving place of a special occasion- but I hope that we go back for other times too, the food is just THAT good if you’re willing to spend a little more money.

Posted by Nakiya @ Taste of Baltimore at 3:59 PM