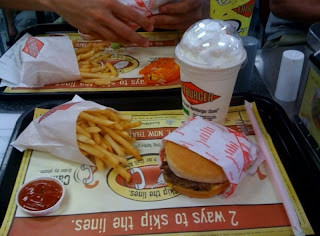 First of all, I can’t believe I ate at a place called FATBURGER. I mean seriously? My colleague and I always joke that we can never eat at Blimpie’s because of the name- so who came up with Fatburger to make us feel worse (Although, Potbelly had me hooked when I went to college, so maybe it’s not that big of a deal)?

However, I got over my hatred for the name because the place received rave reviews from my friends. The fact that one of their additional burger toppings is a fried egg had a lot of appeal for people.

However, because I was feeling self-conscious, I ended up choosing the Baby Fat Burger with Skinny Fries (instead of Fat fries that are thicker cut…….and let’s be honest..because they were called Skinny). I didn’t get the egg topping, which I found to be a big mistake because my burger was RIDICULOUSLY dry. It wasn’t moist at all- definitely overcooked. I understand that I chose to get a smaller burger- but if you’re not going to cook it right, don’t offer it. I mean, don’t get me wrong, I still ate the burger, but it just didn’t live up to the hype.

Dan, however, ordered a Fatburger with the egg. I tried that and it was significantly better. He also ordered the vanilla milkshake which I stole a couple of sips of- yummy! Very thick though- so prepare to share!

In the end, I probably will never drive up to Elkridge again just to get this burger- I’m going to stick to places around me that make it better.

Posted by Nakiya @ Taste of Baltimore at 5:04 PM

I had heard so much hype about fat burger, with the eggs and chili, that when I had it, I couldn't believe it was the same place. I know it's a west coast chain, and maybe this is a one off. For $8 bucks a burger there are much better ones around. It's definitely small and overcrowded.

I agree, there are definitely better places around for a burger.

Why is it that the burger always comes w/ the fries? Almost all of the restaurant serve this. I hope they can serve somewhat new....