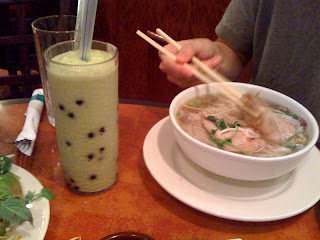 My friends, Nick (also a food blogger at World of Eats) and Kim, have often told Dan and I about Pho, a Vietnamese dish that they had loved when they were in Vietnam last summer. I was pretty sure I had tried it once when I was in college, but it obviously didn't make that much of an impression since I just remembered that it was a soupy thing that was kind of bland.

Well not at this place. 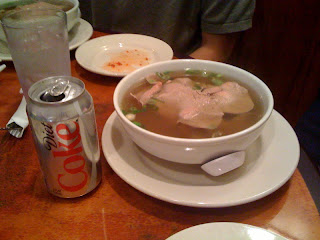 First of all, if you are coming here for some Pho, your dinner is going to be a cheap one it is SO reasonably priced. I ordered a bowl with 3 different cuts of meat, making sure I left out tripe (I am not into stomach linings, sorry). I was expecting a good sized bowl of soup, but what we received was quite ginormous! I'm pretty sure there was enough liquid in that bowl to water an entire garden (if it were water and not a Vietnamese broth....). The meals also came with a couple of accoutrements – bean sprouts, cilantro, and some sauces. 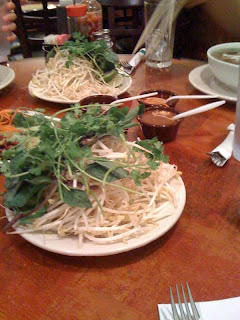 I LOVED Pho, LOVED IT. I want it soon and I want it often just writing about it. I love that you can personalize your broth with the herbs and the sauces, but I must say that I enjoyed the broth even without anything in it, which thoroughly surprised me.

If you are hesitant to check this out, I really urge you to try this meal. The other entrees looked spectacular as well, but Pho is so quintessentially Vietnamese that it would be a shame to pass up on trying it first! p.s. My friend tried their avocado smoothie and said it was delicious and avocado-y!