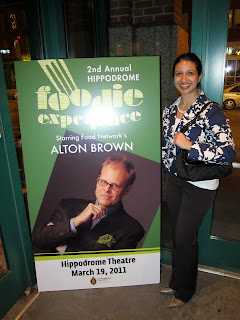 The Hippodrome Foodie Event with Alton Brown was straight up awesome.  I'm not sure how else to describe the entire evening, but I'm not sure I stopped smiling (the picture above was taken at the end of the night and I was STILL smiling!).  Alton Brown was HILARIOUS and kept me entertained the whole time.  He had a special email specifically for the show for audience members to send him questions to answer throughout the evening.  It made for an even funnier time, and proved how much of a talent Alton has at being an entertainer.  I loved his thoughts about food and family and weight-loss.  It was such a great treat to see him in person.

And then when he finished - the night was still not over.

More than 20 different restaurants were offering samplings of their fares.  Sure, it was crowded and people were excited - but it was surprisingly not a madhouse.  The lines weren't unbearable, but when they were long they gave us some time to digest our previous sampling, whether it was braised rabbit or a wild boar meat sauce! 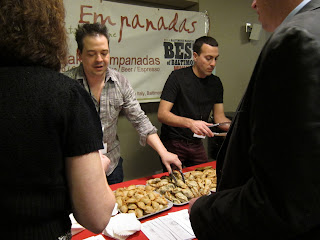 Max's Empanadas served mini chicken and beef empanadas, which was a great idea in my opinion - it was unfussy which allowed people to get out of line quickly. 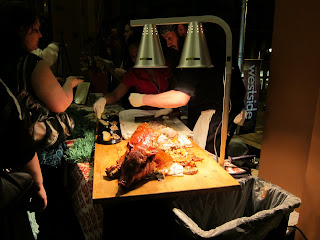 Mr Rain's Fun House carved up a whole pig for their display and served the meat with spicy BBQ sauce. 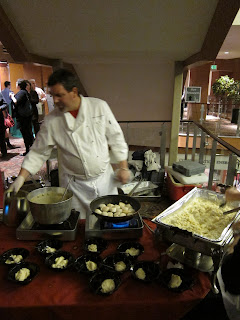 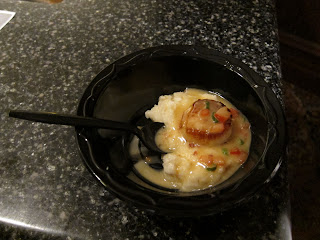 And then there was Langermanns.  Oh Langermanns I can never forget you.  They seared scallops and served them on cheesy grits and then poured a butter bacon sauce on top.  Warm comfort in a bowl.  I need to go to this restaurant solely because of this....and I guess that was the point :)
Overall , Dan and I had a BLAST!  We both agreed we would absolutely come to this next year, regardless of the performer!  I know it's expensive, but we really thought it was worth it hands down. Oh yes, and Dan came face-to-face with a new true love - the Krispy Kreme Bread Pudding from Ale Mary's!  :)
Posted by Nakiya @ Taste of Baltimore at 9:15 PM

sweet! I was there too, and loved it! While I was in line for the table that had the bacon sticks, Alton walked through the room, and he took a picture with me!!! :) such a great guy.

OMG SO JEALOUS!!!!!!!!!! I would have totally screamed! :) Oh, and how could I also forget that the bacon sticks were also Dan's true love hahahaha.

Thank you for posting this. I was just telling someone at work about this amazing seared scallop I had at this event, but couldn't remember the name of the restaurant. I'll definitely be checking out Langermann's.

You are so welcome! Wasn't it amazing!?!?! I really need to check that place out soon too