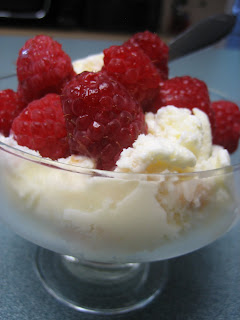 Directions:
So there you have it.  I am not going to sit here and tell you to make all my changes, although I really do think the 20oz can of lychees are enough.  I added the raspberries for a pretty photo - but they turned out to be a really nice foil to the sweetness of the ice cream.
Would I make this again?  Definitely! Just a word for the wise - the lychees are best when they are not entirely frozen, so wait about five minutes until the lychees are tender and chewy! 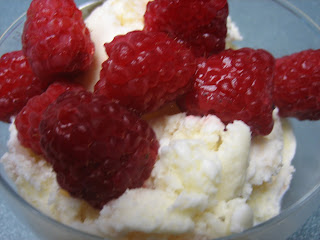 Yummles! I want - but fear - an ice cream machine!

Trix - Oh, I know...I am already planning my next batch and I haven't even finished the lychee ice cream in the freezer :o/